It’s interesting to come across old comics that are so obviously products of a certain time in history. The effect produced in a modern reader is often completely divorced from their original intent. 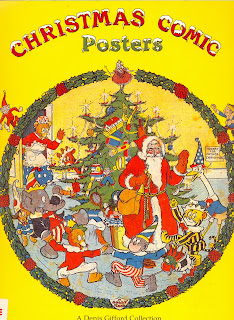 For those of you who don’t know of Gifford, he was a writer who covered various areas of pop culture including horror, film and comics, producing many books in the process. He drew comics for a time as well, and he also produced a wonderful book called The International Book of Comics in the 1980s, which my parents bought for me years ago (for Christmas, coincidentally).

As I looked through the book I came across a fascinating front page, which I’ll reproduce here: 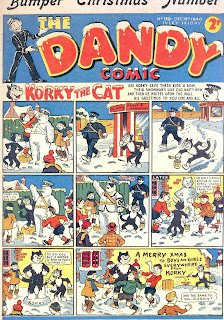 It seems so incongruous to modern eyes, having Hitler appear in a children’s comic, and it really illustrates the difference between how wartime and modern readers’ would react to this strip. It’s propaganda, of course, in its attempt to ridicule and belittle Hitler, poking fun at his appearance and salute. The main difference for us as modern readers is that we have much more detailed knowledge of the twisted legacy Hitler has left. He is probably the most monstrous personality of the twentieth century, if not the whole of history.

For this strip, the original context is no longer relevant and the original intention is no longer appropriate for a modern reader. Hitler can never be depicted as a figure to ridicule again: only to despise and hate. We can only try and put ourselves in the place of a wartime child to try and imagine the intended effect of the strip.

Gifford’s book briefly mentions another strip called 'Addie and Hermy the Nasty Nazis'. Here is an example that I found:

I think this strip is utterly bizarre. It’s certainly much different to how US mainstream comics handled the Nazis at this time. In titles like Captain America Comics, Hitler and the Nazis were depicted as serious threats and treated like dangerous enemies to be defeated, which they were on a regular basis through the war years. It’s a dramatic portrayal which seemed to embody a particular type of American confidence that they wanted to project, both in reality and in their comics. Characters like Captain America could always solve Nazi threats with a well aimed sock to the jaw. 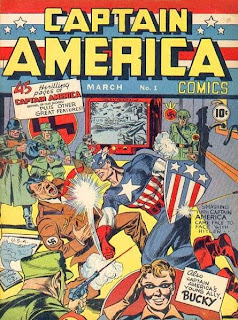 In the UK, however, humour comics dominated the newsagents’ shelves, not only through the war years but for much of the last century. In our own quiet way we Brits poked fun at our enemies through the creation of surreal, distorted doppelgangers who spoke in phrases peppered with “der” and mangled English – “We must hurry to der home, mine leader”. Perhaps it was our nation’s way of dealing with the fear of what they represented. Such comics certainly helped to negate Nazi threats and psychological tactics, and reduced their perpetrators to the roles of buffoons or clowns. It’s an approach that was also adopted by Charlie Chaplin in The Great Dictator (released October 1940). The film predated America’s entry into the war (as did the creation of Captain America. Chaplin mericilessly attacks Nazism and Hitler through ridicule and parody, and he adopted the role of Adenoid Hynkel (a Hitler-like figure) to help achieve this goal. 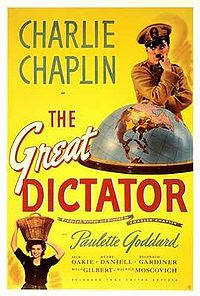 Chaplin, UK born and bred, would no doubt have understood the appeal of these wartime UK comics, which shared his sense of absurdity, comedy and morality.

Posted by Andrew Edwards at 9:38 AM