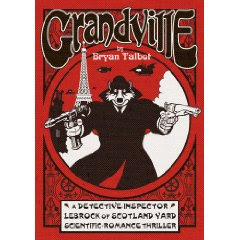 Bryan Talbot has established a reputation for producing engaging and thought-provoking work. His first major work, The Adventures of Luther Arkwright, established him as one of the founding fathers of the British graphic novel, while The Tale of One Bad Rat saw him deal with issues like child abuse and homelessness with intelligence and sensitivity. His previous graphic novel, Alice in Sunderland, has been critically acclaimed as one of the most accomplished graphic novels ever produced, with its use of multimedia techniques, historical investigation and vaudevillian excess to create a highly memorable reading experience. Grandville is Talbot’s first major piece since he produced Alice in Sunderland, and it does not disappoint.

It is beautifully designed book, with a heavy, canvas-style backing, stitched binding, and glossy, heavy-stock paper. This is a book that’s designed to last, and it rivals Chris Ware’s work in terms of quality production values.

Talbot has classified Grandville as a ‘scientific romance thriller’, a phrase which neatly captures the sense of Victorian popular fiction that has influenced this work, such as Conan Doyle’s Sherlock Holmes stories, or H.G. Wells’ early SF work. The tale itself is set an alternative universe, like Arkwright, but anthropomorphic animals are the dominant species here. Another major historical change is Britain losing the Napoleonic wars, but Britain reasserted its independence 23 years ago. Despite this, it seems to remain subservient to France in many ways, and no love is lost between either nation.

The story is focused on an investigation into the death of Raymond Leigh-Otter, a British diplomat who may have been involved in clandestine operations. Detective Inspector LeBrock is in charge of this murder investigation, and he is an engaging character, a mixture of gruffness and strength who employs a practical, no-nonsense approach to his British style of policing. He is aided by Detective Ratzi, his faithful companion. The fact that they are a badger and a rat respectively only adds to the appeal of Talbot’s engaging mystery, and is evidence of Talbot’s major inspiration: his title Grandville was inspired by the pseudonym of Jean Ignace Isidore Gerard (1803-47), J G Grandville, a French artist partly famed for his illustrations of anthropomorphic animals.

The universe Talbot creates is visually stunning and intellectually engaging. LeBrock and Ratzi are sent to France, and architecture like the Channel railway bridge almost defies belief. The influence of another French artist, Albert Robida (1848-1926), is at work here, and Robida also wrote some well regarded early works of science fiction. Grandville is a gorgeous visual feast, blending sublime architecture, visceral action and engaging characterisation into a stunning whole. The opening pages alone are a master class in depicting three-dimensional action in the 2D medium of comics through the use of dramatic perspectives, angles, and blurred images.

The work gains added depth and texture through Talbot’s inclusion of wonderful tongue-in-cheek references to comics’ culture which will raise a smile for even the most jaded comics’ enthusiast – I particularly liked the references made about Angouleme and certain elements from the Tintin books. This is a promising first volume and creates high expectations for its sequels.
Posted by Andrew Edwards at 9:31 AM