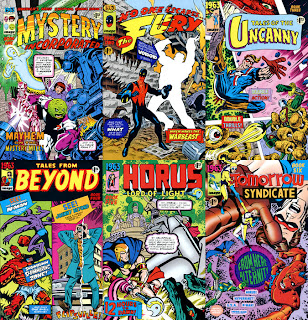 Some of my favourite interviews EVER were with the creators of the 1963 miniseries published by Image comics in 1993. They were conducted by Tom Field and I think they are fascinating reading and really complement the parodic aims of the series. You can read all of the interviews by starting here.

I was lucky enough to ask Mr Field about these fascinating interviews for my PhD research on Alan Moore, and he was kind enough to allow me to share his responses with you below (answers are in bold type):


How were the interviews conducted? These interviews were conducted by phone back in 1993 – with the exception of Alan’s own contributions. It was such work for him to get into the persona of ‘Amiable Al’ that he had to compose his responses on paper and submit them to me via fax.

How much input (if any) into the interviews did the artists on the series have as a whole? A great deal of input. Everyone involved knew what we wanted to do upfront, which was to create a fanzine parody and interview each 1963 creator in character. They all decided upfront what their characters would be like, and they described them to me, so I could ask appropriate questions. I may even have run some of the questions by them in advance. This was pre-email, so we did all our conversations via phone or fax. Steve Bissette, Rick Veitch and Dave Gibbons were particularly funny, and at times our conversations would just devolve into laughter – we cracked ourselves up! The only 1963 creator to politely decline an interview, by the way, was Chester Brown. Guess he was the Ditko of the group. J

How much did Alan Moore provide for the interviews i.e. did he ‘ghost-write’ the artists’ response? No, Alan had no direct input on the artists’ response. He may have helped shape the personalities of the creators in his conversations with Bissette and Veitch, but the artists strictly flew solo in their interviews. Alan’s direct involvement was faxing answers to me in response to my questions to ‘Amiable Al.’

How much input did you have i.e. can I assume that you wrote the introductory material and interviewer sections? Yes, I wrote an introduction to the entire package, as well as intros to each interview. And I tried to take on my own persona as a parody of Roy Thomas. In my mind, I was the young, enthusiastic publisher of an Alter Ego style publication from 1963, and I was sharing my good fortune of meeting all these favorite creators.

The interviews fascinate me as they are such a brilliant parody, which is part of my Phd focus. Here’s the backstory: I was approached by former convention promoter Fred Greenberg, who had just launched a weekly comics newspaper and a monthly comics magazine, and he wanted to devote an entire issue of the mag, Comic Talk, to 1963. He’d gone to the Kubert School with Bissette and Veitch, so he really wanted to help them promote the 1963 project. We decided early on that we didn’t want to do just straight interviews with the creators, but rather we wanted to create a parody mag to extend the 1963 experience. Hence, I interviewed Roarin Rick and Sturdy Steve. The shame is: the magazine was cancelled after I completed my work – there even was a cover drawn for it – and so the package never saw print until Bissette published it online some years ago. Guess it’s fitting in a way because 1963 never quite got finished either. I had a blast on the project, though, and have always wished it might see print with a collection of the series. Hard to believe we’re coming up on the 20th anniversary.

Posted by Andrew Edwards at 6:12 AM