The North Wales School of Art and Design at Glyndwr University in Wrexham is the first academic institute in the UK to offer a degree course in creating comics and graphic novels. Dan Berry, Senior Lecturer in Visual Communication at Glyndwr University, has done much to develop and promote this degree, which began in the Autumn term of 2008. Berry, along with colleagues Yadzia Williams, Sue Thornton and Desdemona McCannon, provide the backbone to a thorough grounding in comics and graphic novel illustration, and the wider graphic arts. The student intake has doubled in the second year, and the future looks bright for this innovative degree. Berry is pleased with the progress made so far. 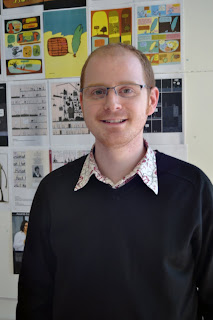 “We have a good mixture of students, with a 50-50 balance between male and female students, which is great. Students show a really broad range in their interests, but in the main males tend to like superhero stuff and manga, while girls like manga. So we look to broaden their horizons. Telling stories with words and pictures can start out by imitating. The key is for them to have wider influences by introducing them to new things on the course. I try not to enforce all my biases on them, and individual students have different needs. We are also starting to see people with more of an interest in small press comics by people like Marc Ellerby and Adam Cadwell, which is great."

Berry’s background is a rich mixture of experience. He left school at 16, and wanted to make films. He was persuaded to enrol on a BTEC in Performing Arts, which was not about film as he was led to believe, and took a job with his local council buying computers. This was followed by a stream of eclectic positions over the next five years, “working in an old people's home, on building sites, factories, Toys R Us and Currys."

The constant thread running through this period was Berry’s developing interest in drawing and computer work. “I taught myself to code using HTML, modelling programs and drawing comics. I needed time and focus, so I enrolled on a degree in multimedia design at Glyndwr University. I became interested in telling stories visually, and whether or not comics could be an interactive medium. This was an area I continued to focus on in my Masters degree studies. I became interested in how comics fit together, like little Lego Bricks. I experimented with interactively cropping and re-framing panels from Toppfer’s Obadiah Oldbuck. I also worked with Chris Ware’s Jimmy Corrigan, allowing the users to rearrange panels and inserting new dialogue into the work to tell their own stories.”

“I also did work experience in Web 3D with an architectural visualisation company, and was Lead designer for a year for a viral marketing agency, working with clients such as the British Chamber of Commerce, BBC, software companies, Carlsberg and others. Following that I did temp work for a while, and then became a lecturer at Glyndwr University.”

In terms of how students prepare best themselves for a degree course like this, Berry has some sound advice. “A one year foundation art diploma gives a really good basis for the demands of a degree course like this, and often prepares the student far better than an Art A-level, which often doesn’t prepare the student for a full-time workload. Students are often offered a place on the strength of their portfolio following a National Diploma, which is a very good introduction to the world of art." He stresses the importance of developing a portfolio, and he likes to see evidence of lots of sketchbook work and finished pieces, especially during interviews with prospective students. “I like people who are interested in storytelling. I'm interested in people who obsessively draw, and are interested in a range of areas like painting, textiles, printmaking, collage, lifedrawing.”

Berry eloquently lists the advantages of taking this degree course, for aspiring cartoonists and artists in general. “We teach key Principles and offer a variety of experience and a strong foothold in design that can be applied to graphic design, multi-media and illustration. This gives students a wider range of experience. We also offer a broader scope of what comics can be through exploring graphic design, narrative, and typesetting.”

“By giving students a broad introduction to the world of graphic design they can gain employment in a wide range of creative industries, and they can support themselves doing what they love – comics and graphic novels. A degree also helps you attain technical proficiency and the importance of meeting of deadlines. We are also in the process of validating a number of MA degrees, and there will be a ‘Graphic Novel’ route through this postgraduate programme too. We hope that this will start in September 2010.”

Former students on the course include Lauren Sharp and Alex Wilmore of Insomnia Publications in the UK, and are co-creators of Krono-City. Other guest lecturers include a mixture of comics and non-comics professionals. Comics pros have included Jim Medway, Jonathan Edwards, John Allison, Joe List and Shane Chebsey. Representatives from the business world have also lectured students, offering expertise in legal and business practices that is invaluable for students’ futures: these include the Tax Office, the Head of the Chartered Society for Designers, the AOI (Association of Illustrators), and the Arts Council.

Students are already producing and selling work at comics shows and craft fairs all over the UK. They play with the comics form, and work can be put together in various ways, from folded-out piece to beautiful handmade objects, from idiosyncratic and vibrant solo work to accomplished anthology collections like DAWNS. 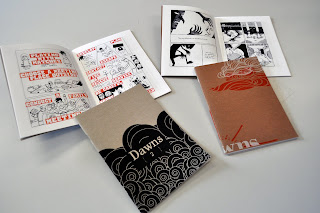 Berry also produces his own webcomic, Oxford Clay, feeling that “it’s important to practice what you preach” and he attends 'Doodleplanet' once a month at Telford's Warehouse in Chester, a freeform drawing event in which there are canvases on the wall for people to draw on. 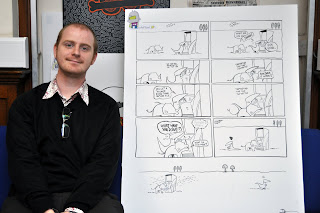 As I looked through a selection of the work coming out of this University department I was struck by how powerful and intriguing it is. Work like this is vital to the development of comics and graphic novels in the future.

Berry also has ideas to take comics out into the wider community. He has successfully undertaken a project in local secondary schools with Dr Mel Gibson, which resulted in an anthology of the children’s work being published. Berry sees the benefits such projects may have for other sectors of society 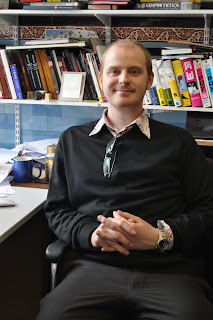 “I’d like to do a comics project in prisons, which is an idea inspired by the work of Jean Pierre Mercier and the Ministry of Justice and Education in France during the 1970s. Comics based workshops are a good tool to help people to read and to improve education can be valid.” He sees the future of comics and graphic novels in Britain as a bright one. “Things are definitely getting better in the UK. People like ‘comics maven’ Paul Gravett are actively promote growth of the medium here, while great work like Solipsistic Pop #2, which is coming out soon, shows the quality of what is out there." I’m sure that we will see much more from Dan Berry and the graduates of this course in the years to come.
Posted by Andrew Edwards at 10:53 AM